The fortress of the Castillo de la Concepción is the best starting point to discover the city and acquire an overview of its 3,000 years of history. Punic Carthage was founded in approximately 229 BC by the general Hasdrubal before its natural riches attracted the Romans, who made it one of the most important colonies of Hispania. The city was later ruled over by the Moors before its re-conquest for Castilla by the future King Alfonso X in 1245, and in the 18th century enjoyed a period of military splendour when it became the base of the Maritime Department of the Mediterranean. In the 19th century another golden age was brought about by industrialization and the growth of mercantile traffic in the port.

The location in which the visitor sets out on this journey through history is the Castillo de la Concepción. The castle stands on the hill of the same name, which in the past has been home to a Roman temple dedicated to Asclepius, a Moorish fortress, a medieval castle and the siren which warned the population of bombing raids during the Civil War. In addition, the best panoramic views of the city and its natural harbour are those afforded by the fortress, which is easily reached via the panoramic lift to save walking up the hill.

The Castillo de la Concepción will be closed on days:

* These timetables are subject to modification: please consult before planning a visit. 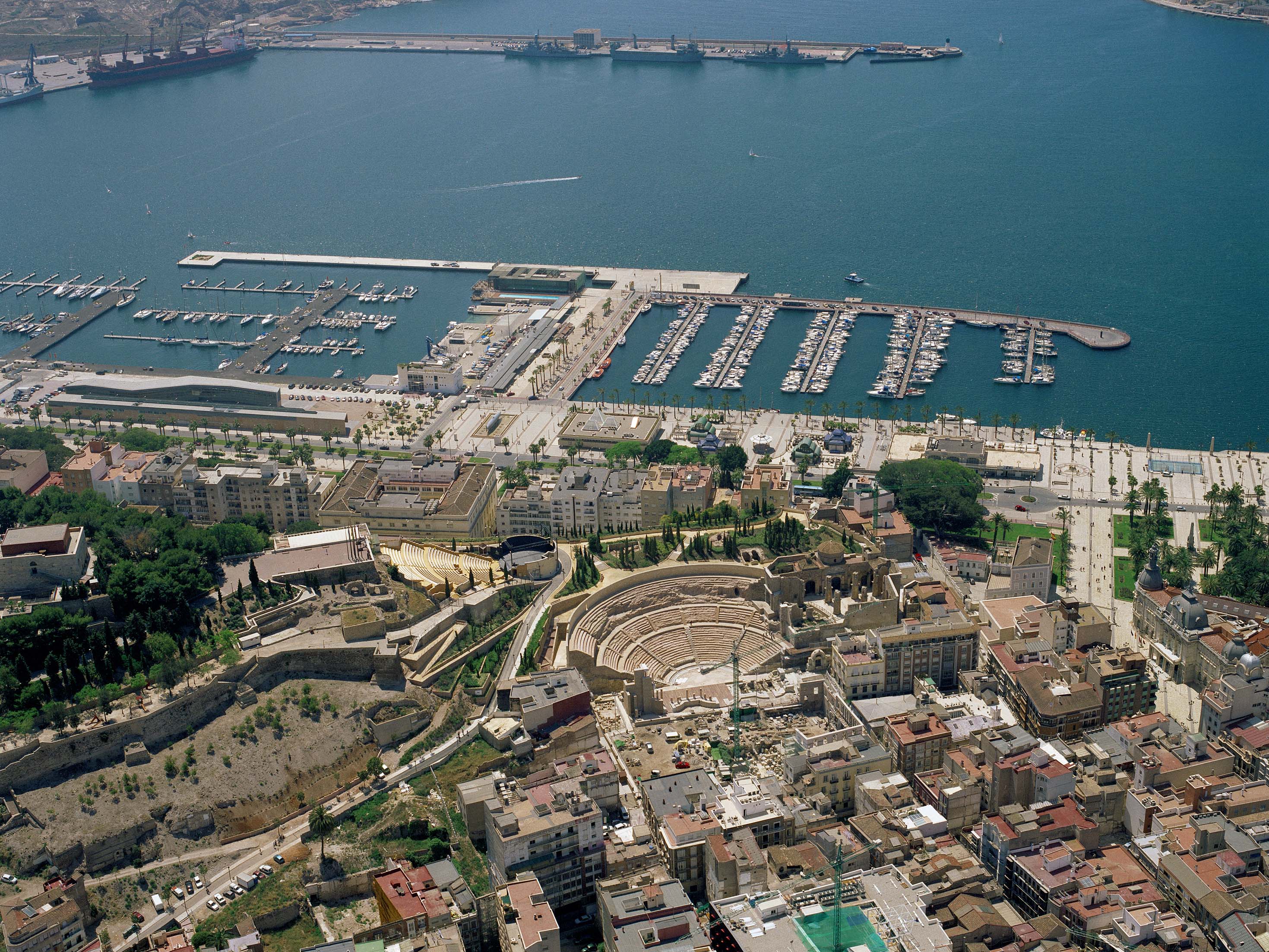 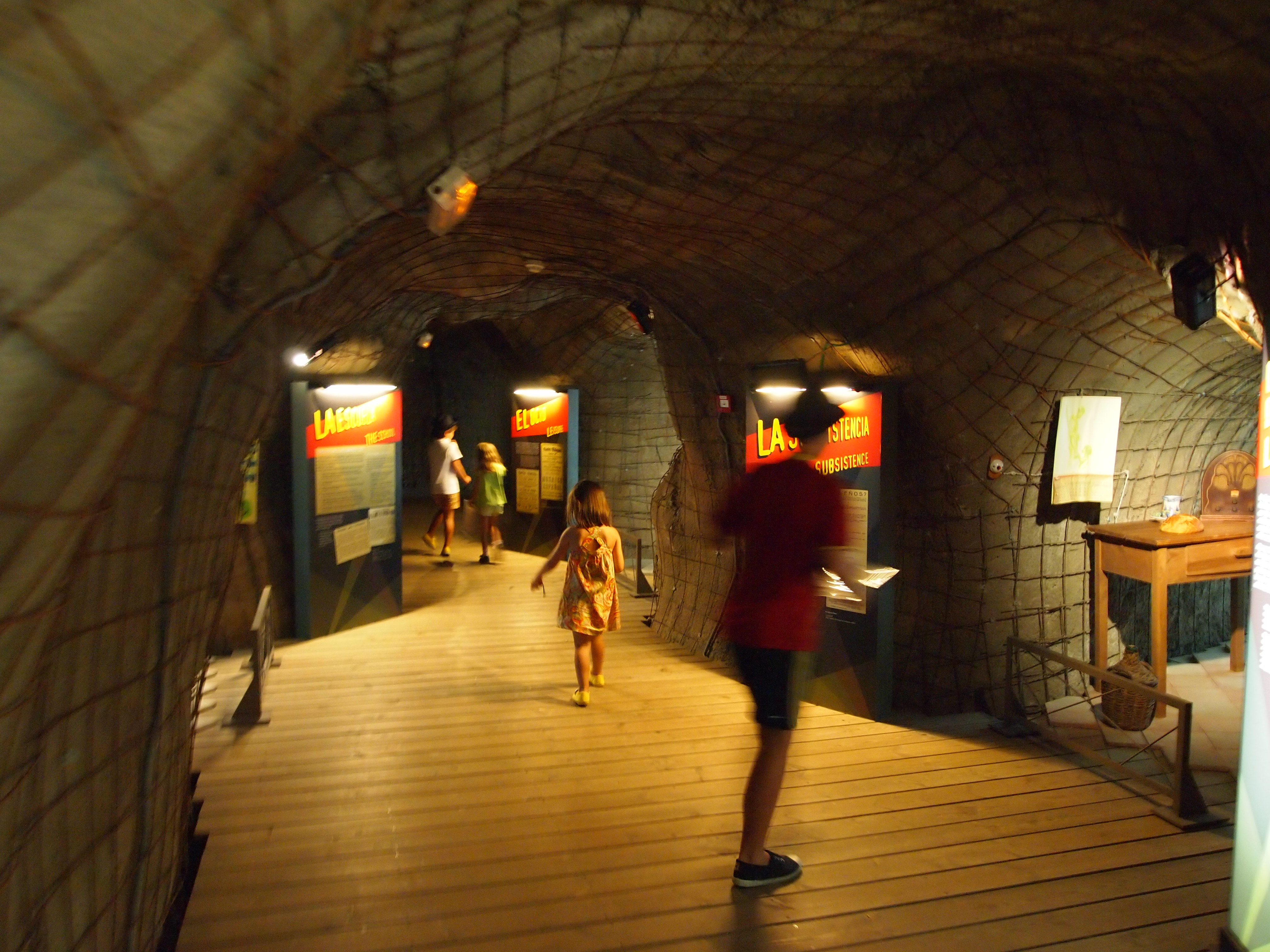 By learning about the consequences of war, we aim to teach students to value and work towards world peace through artistic activities like drawing.

END_OF_DOCUMENT_TOKEN_TO_BE_REPLACED 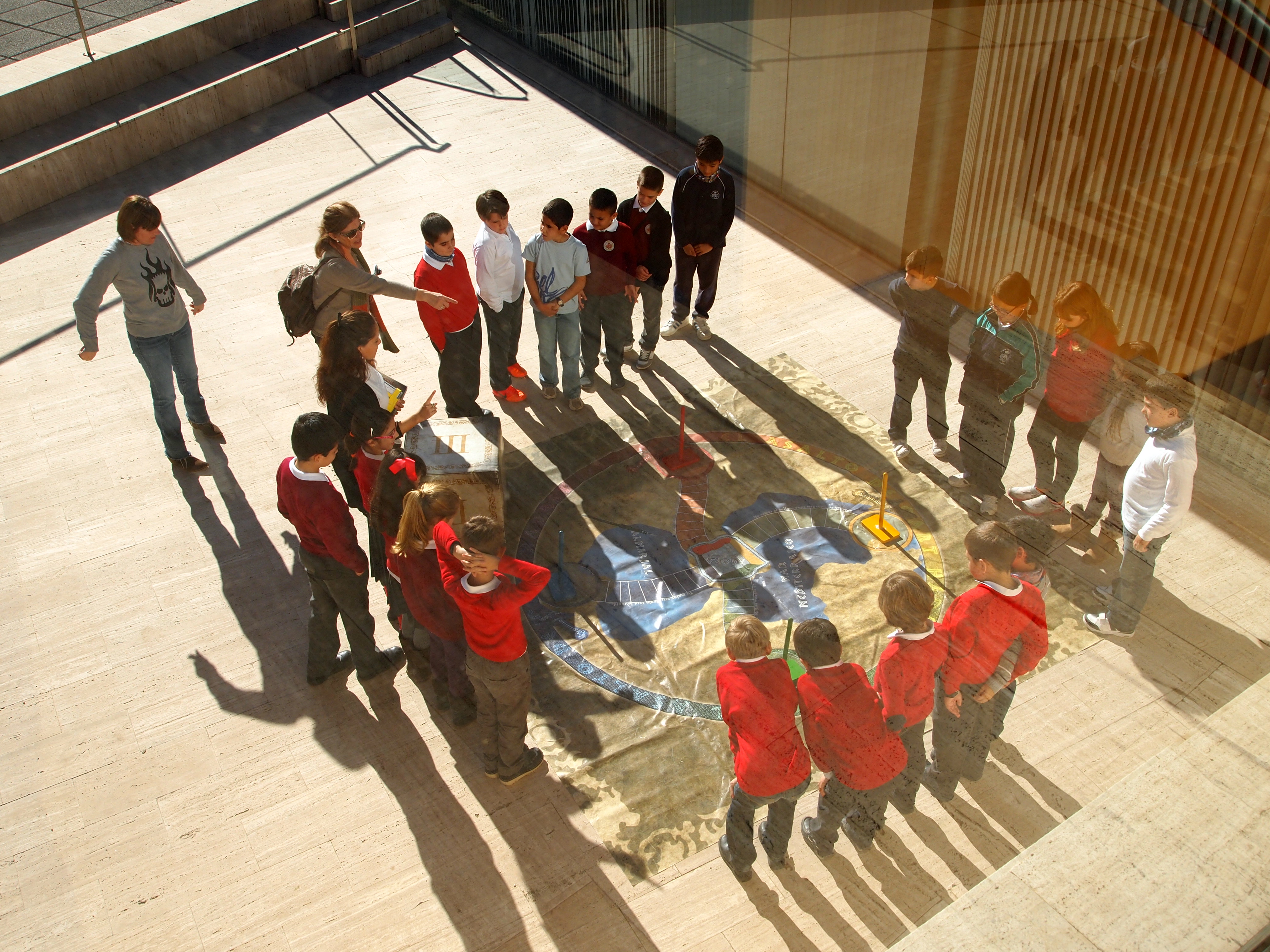 We journey back to the early days of Cartagena to find out who Hasdrubal, Hannibal and Scipio the African were and what the city was like during the Punic era

END_OF_DOCUMENT_TOKEN_TO_BE_REPLACED 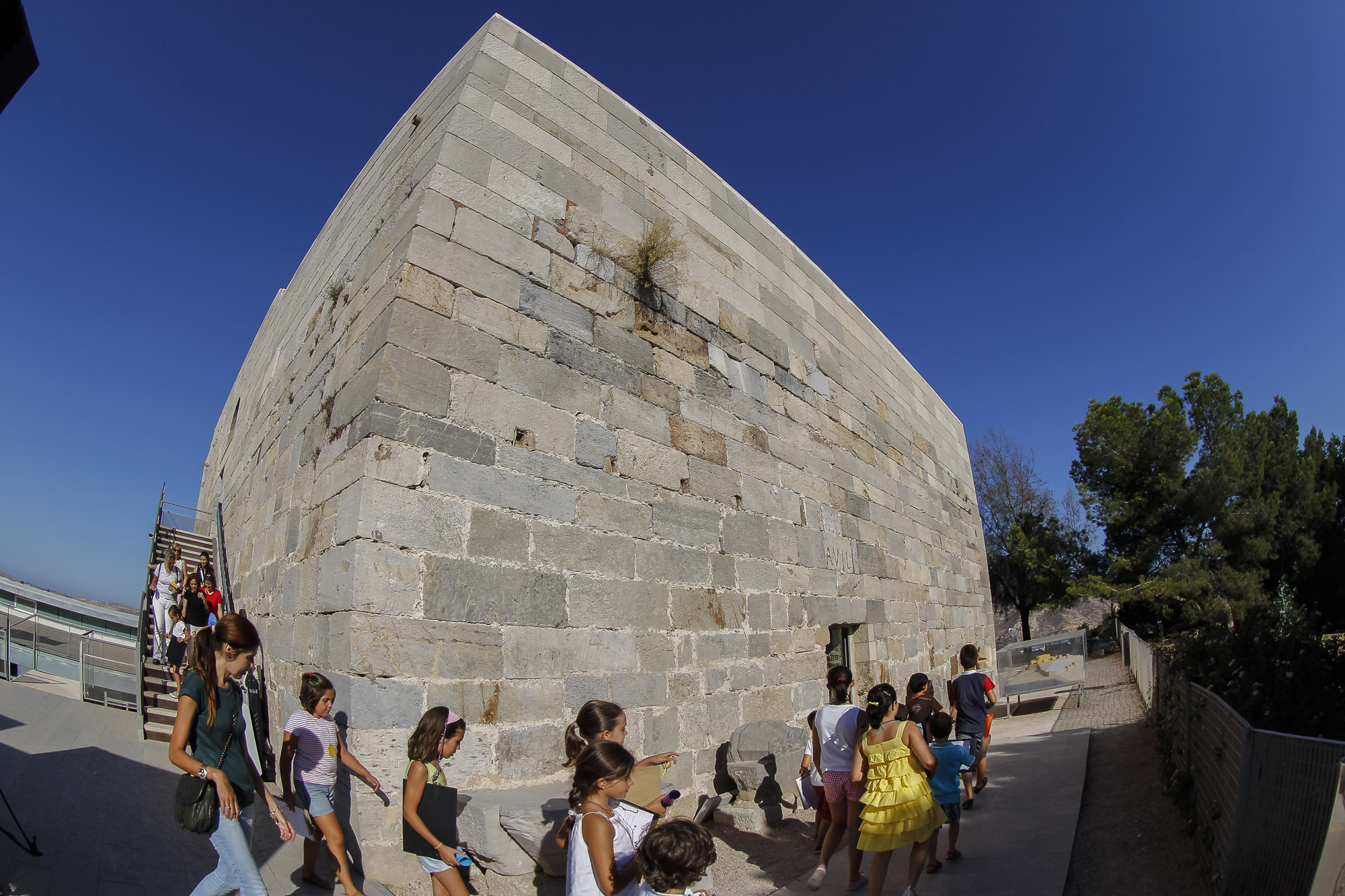 A journey to the Middle Ages that will bring us inside castles, medieval society and its customs, for example dances. We'll show the kids a few steps. In collaboration with CPR of Cartagena.

END_OF_DOCUMENT_TOKEN_TO_BE_REPLACED 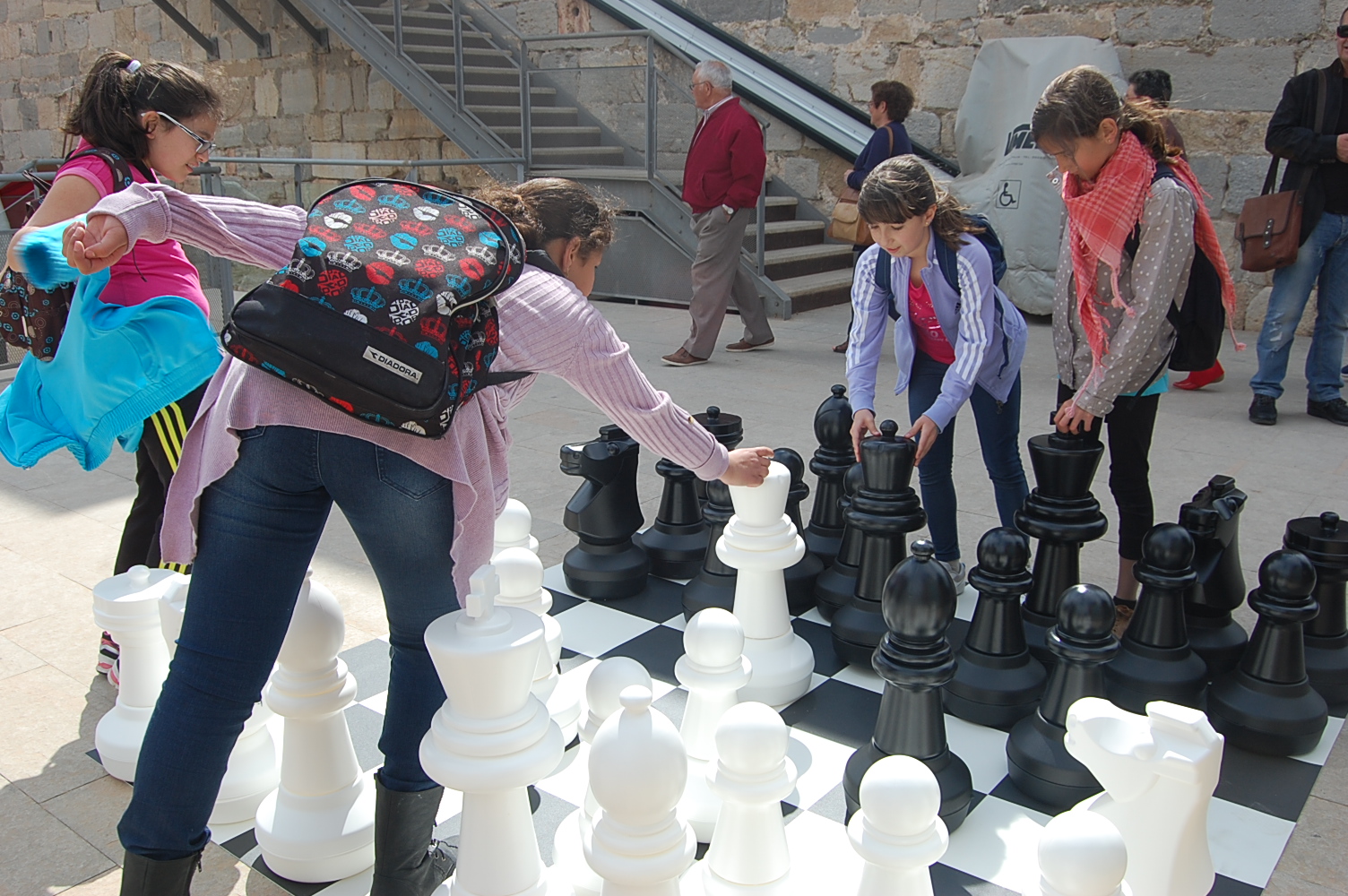 Through a giant chess, the students will know the different strata of medieval society. They must go through the fortress to find the pieces, to complete the board and learn some movements of this millennial game and get to give 'Check to the King'.

END_OF_DOCUMENT_TOKEN_TO_BE_REPLACED

Tourism for all is one of the main objectives of Cartagena Puerto de Culturas. We are working to ensure access for as many visitors as possible. At present, the Castillo de la Concepción offers the following facilities for visitors with special needs:

Enjoy your visit with the audio guides provided by the Castillo de la Concepción. Courtesy of new technology you can visit freely and comfortably at your own pace.
The audio guide is available in 5 languages - Spanish, English, French, German and Russian - and costs 2 euros.

Vending machines
At the Castillo de la Concepción there are machines selling snacks and cold drinks.

In 713 AD the Pact of Tudmir was signed between the Visigoth leader Teodomiro (Tudmir in Arabic) and his Moorish opponent Abd al-Aziz to conclude negotiations for the incorporation of the south-east of the Iberian Peninsula into the area under the authority of Damascus. Little is known of these first years of Islamic occupation due to the lack of documentation and archaeological remains, but Cartagena would probably have been a small nucleus of population in which some of the Roman ruins were re-used for housing and other purposes. From the 10th century onwards, though, the port of Cartagena is mentioned in Arab sources as one of the ports included on their trading routes, and in the 12th and 13th centuries Cartagena is portrayed as an Islamic city on the slopes of the hill of La Concepción with a fortified citadel at the top and various districts within its walls.

Under the pressure of the advancing Christian troops, the last Arab king of Murcia agreed to surrender to the King of Castilla, Ferdinand III, with the signing of the Treaty of Alcaraz. Cartagena and other cities rejected the terms of the capitulation until in 1245 Prince Alfonso, later Alfonso X, surrounded the city at sea and on land and took it by force. Once the city had been incorporated into the Crown of Castilla, both Ferdinand III and Alfonso X granted privileges in an attempt to encourage re-population and the development of trading activity in the port. These same objectives explain the restoration of the episcopal seat and the creation of the Military Order of Santa María of Spain in Cartagena. The problem of succession between the reigns of Alfonso X and Sancho IV had an effect on Cartagena, with the extinction of the Order of Santa María after various naval defeats and the transfer of the bishopric to Murcia on the grounds of the insecurity in the city caused by Moorish piracy.

The origins of the Castillo de la Concepción, a point of strategic importance for the city and its port, lie in the Middle Ages. In the times of the Moors a fortress was built at the top of the hill, consisting of a defensive enclosure formed by a courtyard surrounded by walls and turrets, in the 12th or 13th century. At the western end was the official or military area which, together with the “alcázar” (or fortress), formed the “Alcazaba”, and the walled suburbs of Qartayannat -Halfa, the name of Cartagena in the Moorish period, extended down the hillside. There are still traces of the towers, possibly created in the Almohad caliphate, Almohads, built of rammed earth and re-used in later construction projects.

In the last quarter of the 13th century, when the city belonged to the crown of Castile, King Alfonso X the Wise ordered the construction of the keep in the interior courtyard of the old Alcázar, reusing the Islamic Complex as well as materials such as pilasters, columns and stones bearing inscriptions from the Roman ruins. The Norman-style fortification had a dual purpose: on the one hand it was a strategic point, looking out over the seafront as well as inland, and on the other hand it could be seen from any point and thus reaffirmed the power of the Monarch over the territorial and political environment.

On entering the tower there is a spiral staircase leading to the roof terrace and the main rooms are distributed around a large central pillar which at the time supported the ribbed vaults. In the corbels of these vaults are an interesting series of icons alluding to the power of the Monarch: the eagle, the fleur-de-lis and a face which possibly represents the Emperor Charlemagne. In the lower part are the castle’s rainwater storage tanks or cisterns. The keep in Cartagena is very similar to those in the castles of Lorca, Aledo and Moratalla: however, these are higher, which leads to a hypothesis that construction work in Cartagena was never completed.

In the late 17th and early 18th centuries the Castillo de la Concepción was enlarged, with a space added for a garrison: this explains the finding of a kitchen. In the 18th century, with the re fortification of Cartagena, the demolition of the old medieval fortress was planned as the growth in the number of city dwellers created a demand for space, but it was not until the last third of the 19th century that demolition work began. The first elements to be removed were the upper floors of the keep and, a few years later, the perimeter walls and the vaults, which made it possible to see the remains of the watchtower again.

At the start of the twentieth century, under the local government of Mayor Alfonso Torres and the supervision of architect Víctor Beltrí, the area around the castle was transformed into a public park, and soon afterwards, in 1931, the fortress was declared a historic-artistic monument.

After centuries of neglect, the castle had to wait until the end of the 1970s for architect Pedro San Martín to draw up a project for the restoration of the keep. Work was started but a lack of funding budget left the castle without its original Gothic-style vaulted roofs, and archaeological action in the following years focussed primarily on the accesses to the fortress.

The recovery of the fortress finally occurred in 2002, when Cartagena Puerto de Culturas adapted it as a Centre for the Interpretation of the History of Cartagena, on this occasion making use of the keep and the ancient water tanks. The archaeological intervention carried out during the work led to the discovery of various rooms which had until then been buried, and these were restored and opened to the public in 2009 to broaden the attraction of the castle. The historical research and archaeological supervision were led by David Munuera and José Antonio Martínez, and the two architectural investigations were carried out by José Manuel Chacón and Alberto Ibero.

The tour of the museum