Visitors to the Fuerte de Navidad can find out in detail about the defensive system of Cartagena throughout history. Enrol as a cabin boy on the Tourist Boat and visit the only coastal battery to have been adapted to show the everyday life of military men in a 19th century fortress. Nestled on the right-hand margin of the bay and next to the lighthouse of the same name, the Fuerte de Navidad has been witness to the political, social and military conflicts of recent centuries.

Explore the casemate bunkers, learn how to handle a cannon and find out how the artillerymen ate and relaxed, and round your visit off by enjoying the magnificent views from the terrace and winding down on the return journey aboard the Tourist Boat.

General: 3.50€
General including travel on the Tourist Boat: 8 euros.

Reduced: 2.50€
Reduced including travel on the Tourist Boat: 6 euros.


* These timetables are subject to modification: please consult before planning a visit. 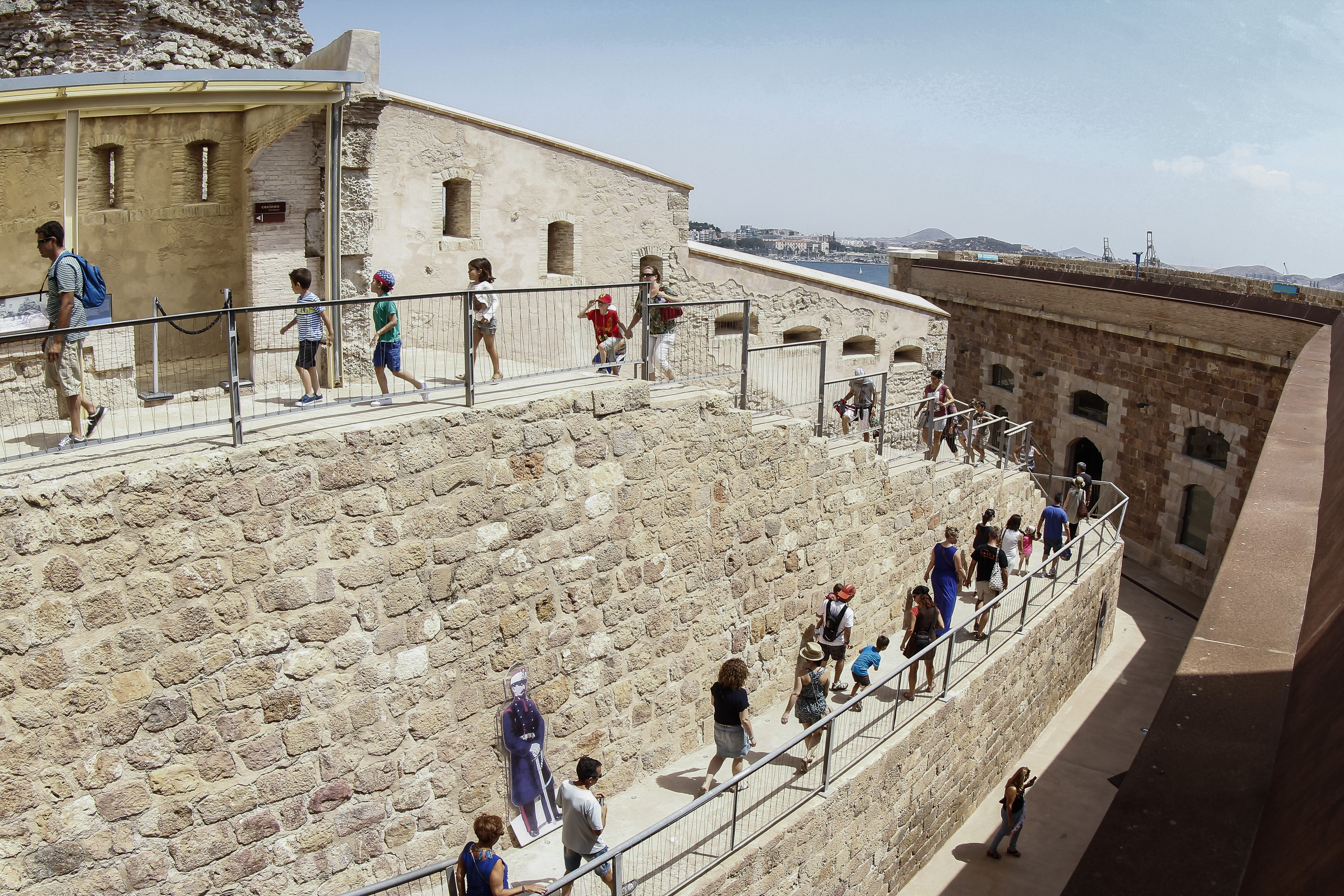 We'll take the children around the bay of Cartagena in our tour boat to access the Christmas Fort. Here, by completing various tests, they'll learn the strategic and military importance of Cartagena. In collaboration with the CPR of Cartagena.

END_OF_DOCUMENT_TOKEN_TO_BE_REPLACED

Tourism for all is one of the main objectives of Cartagena Puerto de Culturas. We are working to ensure access for as many visitors as possible. At present, the Fuerte de Navidad offers the following facilities for visitors with special needs:

Enjoy your visit with the audio guides provided by the Fuerte de Navidad. Courtesy of new technology you can visit freely and comfortably at your own pace. The audio guide is available in 4 languages: Spanish, English, French and Russian, and costs 2 euros.

There are vending machines at the Fuerte de Navidad selling cold drinks and snacks.


Cartagena’s great importance as a military city dates back to the end of the 17th century, when, under the reign of Charles II, it became the winter base of the galley ship squadron. The immediate result was the construction of four defences around the mouth of the port that ensured that ships were protected: the Podadera and the Fuerte de Navidad on the right-hand side and Trincabotijas and Santa Ana on the left.

During the War of the Spanish Succession the stronghold was occupied by the English fighting on behalf of the pretender to the Spanish throne, Archduke Charles of Austria, although their occupation lasted only five months before the Duke of Berwick recovered it for Felipe V. It was under Felipe that Cartagena became the seat of the Maritime Department of the Mediterranean (1726); the awarding of this status led to the further consolidation of the city as a military base in the Mediterranean and was a turning point in the city’s history. This process of consolidation took place during the second half of the 18th century under King Carlos III with the construction of the principal military works of the city: the Arsenal, the Military Hospital, the walls and the fortifications of Galeras, Atalayas, San Julián and Moros.

In the 19th century Spain was mired in many wars and battles and the stronghold of Cartagena was heavily involved, especially in the Cantonal War (1873). The port and its defences were transformed, above all due to technological advances which brought with them a thorough renewal of the fortification systems. It was in this context that the O'Donnell Plan of 1860 was undertaken, including the renovation of the Fuerte de Navidad and other gun batteries belonging to the city.

The origin of the Fuerte de Navidad was the initial 17th-century construction of a small four-piece artillery platform. Its position meant that the line of fire crossed with that of the battery of Santa Ana, which, along with the batteries of Trincabotijas and Podadera, defended the entrance to the port. In the 19th century a new building was created, improving the defences of the old fortification: but technological advances soon rendered it obsolete in military terms and therefore in the early 20th century, it became the gun saluting battery of the port of Cartagena and remained in operation until 1941, when the last garrison departed.

It was designed by Spanish military engineers in the neoclassical style and equipped with casemates. The angular building forms a curve with the open side looking out to sea and is organized around a patio-corridor which gave access to the eight casemates, each of which contained an artillery piece. To protect them from the impact of projectiles a method known as bomb proof vaulting was employed: that is, above the vaults earth and stones were piled to a thickness of more than two metres. At the apex of the angle was the powder store, which contained stocks of gunpowder and the shells for the guns. The firepower was completed with nine other pieces located on the terrace, which were accessed via two spiral staircases. In the rear of the fortress were the other rooms used in the everyday life of the garrison of the fort, with kitchens, latrines and barracks.

The restoration of the Fuerte de Navidad was the first in any element of the defence system of the Bay of Cartagena defence system. The fortress was left neglected until 2004, when the Ministry of Defence ceded it to the Town Hall of Cartagena Town Hall for use in tourism on condition that it should be restored. The restoration project began in 2004, based on a master plan for the entire bay, and was completed in 2007. Architects Francisco Javier Lopez and Ricardo Sanchez were commissioned to oversee the work.

During the restoration phase a thorough search of documentation was performed to establish the different historical phases and research and archaeological were conducted by José Antonio Martínez and David Munuera.

All of these actions were combined under the management of Cartagena Puerto de Culturas and culminated in the opening to the public of the Fuerte de Navidad in 2007.